One thing that I can testify to, once I change over to AMSOIL in my Harley Davidson Softail. I saw lower temperatures and quieter, smoother shifts after that AMSOIL went into everything I own with a motor in it. Check out the research in the article below.

Ensure Your Dirt Bike Responds When Asked to Deliver

While confidence stems from experience with the bike and familiarity with the terrain, it’s also the result of knowing your bike is going to deliver progressive, repeatable clutch-lever feel from the first time you let out the clutch until you cross the finish line.

Take the start of a typical motocross race, for example. Riders want firm, positive clutch-lever feel as they rev the engine in anticipation of the gate dropping. When the gate drops, the bike should hook-up smoothly and with consistent power so they can grab the holeshot. Again, as they work up through the gears, clutch-lever feel should be crisp and consistent, not sloppy and loose.

It’s no different on the trails around home. Each time riders maneuver around an obstacle on the trail or accelerate down a straightaway, they want consistent, crisp shifts.

The transmission lubricant plays a vital role in clutch feel. To see why, you need to know how a dirt bike clutch works.

The clutch connects the engine and transmission via a series of alternating friction and steel plates (see images). When you squeeze the clutch lever, the pressure plate separates the steel and friction plates, allowing them to rotate independently. This allows the bike to idle without moving.

As you let out the clutch lever, the pressure plate squeezes together the friction and steel plates. This binds the engine to the transmission and moves the bike.

The transition from the friction and steel plates spinning independently to becoming bound together is an example of dynamic friction. Once the plates are locked together and spinning in unison, they’re subject to the principles of static friction.

The lubricant plays a vital role in both areas. The formulation influences dynamic friction, which is best thought of as clutch feel. Oils with incorrect frictional properties can result in inconsistent or loose clutch feel. That negatively affects your ability to confidently start quickly and grab the holeshot in a race. The oil also contributes to the holding power, or static friction, between the plates once the clutch lever has been let all the way out. Oils with incorrect frictional properties can allow the plates to slip in some circumstances, which you’ll feel as lost power to the ground. This is more common in motorcycles. A powerful V-twin riding up a hill, for example, can generate sufficient load to cause the clutch plates to slip and the bike to surge.

The oil’s additive chemistry has the greatest effect on performance. Friction modifiers, added to some passenger car/light truck motor oils to maximize fuel economy, can decrease the coefficient of friction within the clutch pack and result in excessive slippage. Extreme-pressure additives, commonly used in gear lubes to protect against shock loads and intense pressures, can cause excessive clutch slippage and related damage.

The key is to use a lubricant specifically formulated for wet clutches. AMSOIL Synthetic Dirt Bike Oil and Synthetic Dirt Bike Transmission Fluid contain no friction modifiers or extreme-pressure additives. They’re dialed-in with the correct frictional properties to promote smooth shifts and consistent clutch feel while guarding against wear for long clutch life.

How Does AMSOIL Synthetic Dirt Bike Oil Stand Up? 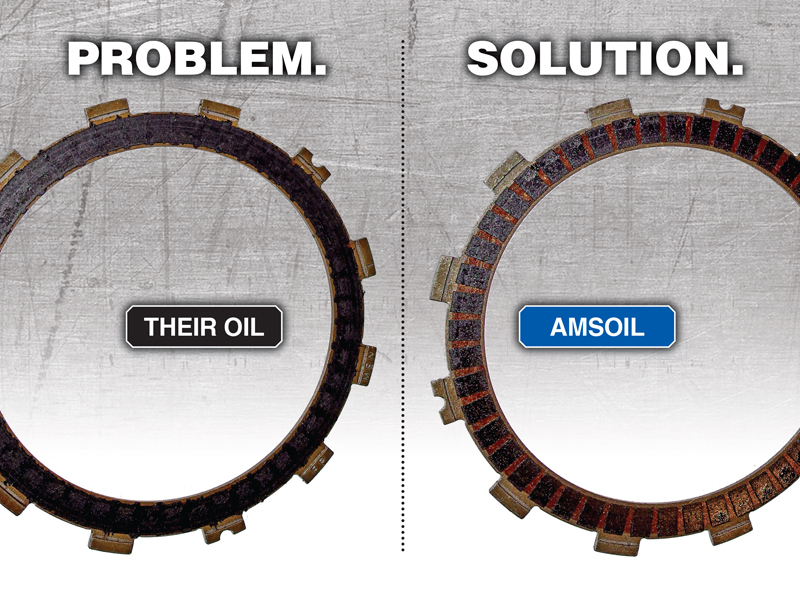