I own and am the caretaker of a 32 Ford Roadster. It was my good friends pride an joy and after he lost his battle cancer last year he left it to me. To say this car means a lot tome is putting it lightly. I trust AMSOIL Z-rod to protect the older 302 V8. Take a look at this article and see how by steeping up to AMSOIL, you are stepping up the protection on your Hot Rod.

Remember as a preferred customer you receive 25% off on all products and free shipping on orders 100.00 or more. Shop

AMSOIL Z-ROD® Synthetic Motor Oil protects engines on the highway and in the garage.

New 10W-40 viscosity joins the lineup, protecting engines on the street and during storage.

Taking your classic car or hot rod out of storage is an exciting time for enthusiasts. For many, it marks the end of a long winter or lengthy period of inactivity during which their prized car was stored under cover in the garage.

Storage invites engine-damaging corrosion
During that time, rust or corrosion may have formed on engine parts due to humidity and moisture from changes in ambient temperature.

Rust and corrosion can be just as devastating to an engine as dirt or sludge. It can flake off metal and populate the oil with wear-causing particles, which scour bearings, cam lobes and other parts before the filter has a chance to capture them.

It contains potent rust and corrosion inhibitors that protect the inside of your engine during storage so you can rest assured it will be ready to roll when you are.

Motor oil has no natural ability to resist rust or corrosion. Instead, special inhibitors must be added to the formulation to keep metal components protected. Not all motor oils contain sufficient rust and corrosion inhibitors to protect engines during long-term storage. 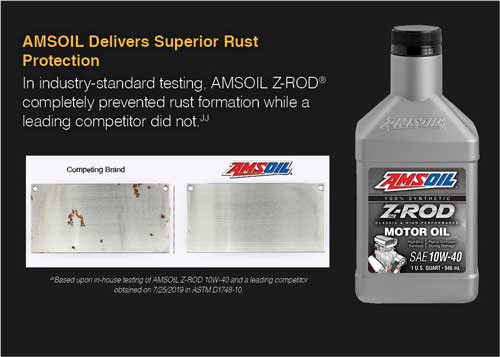 Their design makes them especially vulnerable to wear. As the name indicates, the tappet, or lifter, is flat. During operation, the surface of the cam lobe slides rapidly over the surface of the tappet, producing high friction and temperatures. The camshaft and lifters are responsible for triggering the precisely tuned movements of the valvetrain. Here, the use of anti-wear additives becomes crucial.

Because most V-8 engines of the muscle car era came standard with flat-tappet cams, the problem is prevalent to classic-car and hot rod owners.

Modern oils aren’t formulated to tackle this problem. They contain reduced ZDDP levels due to its propensity to harm catalytic converters. For that reason, it’s best to use a high-ZDDP oil formulated specifically for classic cars and hot rods, such as AMSOIL Z-ROD Synthetic Motor Oil. It’s available in 10W-30, 10W-40 and 20W-50.

Remember as a preferred customer you receive 25% off on all products and free shipping on orders 100.00 or more. Shop