I find these Testimonials amazing but not surprising I have had first hand experience with  AMSOIL for years. It is the only oil I use in my Diesel truck, Honda Accord, Honda CRV, my beloved 32 Ford Roadster, Harley Davidson Street Glide, Polaris XPT, Toro zero turn, Honda snow blower, Yamaha Outboard, and Onan generator. Yeah I buy a lot of AMSOIL but they make it easy and I sleep well at night knowing I have great protection. Enjoy this article and remember Preferred Customers receive 25% off on all products and free shipping on all orders 100.00 or more. Shop now

Most people can’t believe it when Randy Melvin tells them his 2000 Volkswagen Beetle has 500,000 miles (804,700 km) on it. The UPS tractor-trailer driver from Troutman, N.C., commutes 125 miles (201 km) round trip between home and Winston-Salem, N.C., each day. When it came time to purchase a new vehicle back in 1999, he opted for a VW TDI thanks to its high estimated fuel economy, despite the car’s poor reviews.

“If you go back to the Consumer Reports reviews on that 2000 Beetle, they’re terrible,” said Melvin. “My dad said, ‘Why are you getting that? The reviews are so bad.’” But Melvin knew a Volkswagen mechanic nearby whom he trusted and he wanted the fuel-economy benefits of a diesel.

“At the time, the Volkswagen TDI was hard to get a hold of; you had to be in the right place at the right time,” said Melvin. After 20 years, the 1.9L turbodiesel five-speed manual still gets 46 mpg. 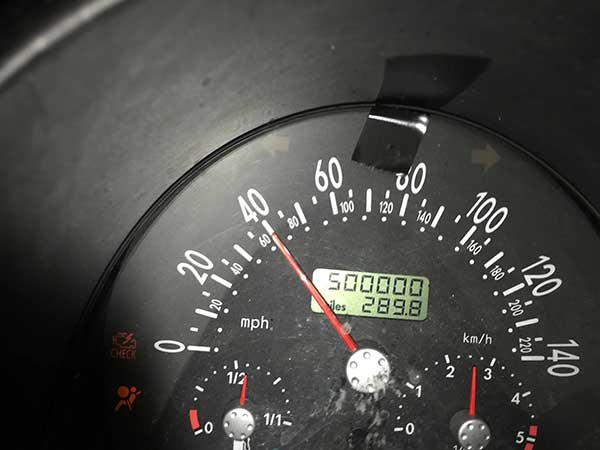 A shop mechanic and AMSOIL Preferred Customer with whom Melvin worked piqued his interest in AMSOIL products after sharing a testimonial about a truck driver who’d eclipsed 1 million miles using AMSOIL products.

The car has run excellent all these years. Melvin hasn’t performed any engine maintenance, except replacing the alternator, air compressor and routine timing-chain service.

“It’s proven to me, especially if you can get a half-million miles with no engine failure whatsoever. The thing runs just as powerfully as it ever did.” Melvin used to have a pre-owned 2001 Volkswagen with the same 1.9L diesel engine. “It only had 192,000 miles (309,000 km), but my 2000 would have run circles around it.”

People can’t believe it
How do people react to his story? “They just can’t believe [the car] has a half a million miles on it,” said Melvin. “Because I’ve worked at night the entire 20 years I’ve owned the car, it sits in the garage mainly in the daytime, so it pretty much looks like a brand-new car.

Drive it until it quits
“I’ve always believed you should drive a car until it quits,” said Melvin. “To me, buying a car every two to three years isn’t beneficial.” With the help of AMSOIL products, it may be a while before Melvin’s Beetle ever quits running. “I just think it’s a good product. It’s proven to me, and I can tell that to anybody,” he said. “I’ll probably work until I’m 62, so I hope to put at least another 150,000 miles (241,000 km) on it.”