Gear Oil is often overlooked when it comes to scheduled maintenance. 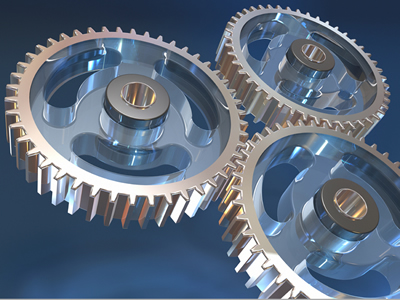 Gear Oil and Motor Oil Are Not the Same

Gear oil differs from motor oil. While many motorists may assume SAE 90 gear oil is thicker than SAE 40 or 50 motor oil, they are actually the same viscosity; the difference is in the additives.

Motor oil contains additives such as detergents and dispersants to combat byproduct chemicals from gasoline or diesel ignition. Because an internal combustion engine has an oil pump and lubricates the bearings with a hydrodynamic film, extreme-pressure additives such as those used in gear oils are not necessary.

Motor oils and gear oils both have anti-wear additives, and they both must lubricate, cool and protect components, but gear oils may be placed under extreme amounts of pressure, creating a propensity for boundary lubrication, a condition in which a full-fluid lubricating film is not present between two rubbing surfaces. For example, differentials in cars and trucks have a ring-and-pinion hypoid gear set. A hypoid gear set can experience boundary lubrication, pressures and sliding action that can wipe most of the lubricant off the gears. To combat this extreme environment, extreme-pressure additives are incorporated into the oil. AMSOIL synthetic gear oils are formulated with an extra treatment of extreme-pressure additives in order to reduce wear and extend gear and bearing life.

Because many of the components found in the drivetrain consist of ferrous material, the lubricant must prevent rust and possible corrosion to other materials. Rust and corrosion problems are not nearly as prevalent in engines.

The many small and intricate components that make up gear sets can be quite noisy and may be subjected to shock-loading. The viscosity and extreme-pressure formulation of gear oil quiets gears and dissipates shock-loading.

The rotating motion of the gear sets also tends to churn the lubricant, leading to foaming. If a gear lube foams, its load-carrying capacity is significantly reduced because the air suspended within the oil is compressible. For example, when the gear teeth come into contact with each other, any trapped air bubbles compress, reducing the thickness of the separating oil film. In turn, this reduction could lead to direct metal-to-metal contact between gear teeth and result in accelerated wear. The gear oil must have the ability to dissipate this entrapped air, ensuring a sufficient lubricating film that protects the gears against contact wear.

Gear designs vary depending on the requirements for rotation speed, degree of gear reduction and torque-loading. Transmissions commonly use spur gears, while hypoid-gear designs are usually used as the main gearing in differentials. Common gear types include the following:

Spur (straight-cut) gears are widely used in parallel-shaft applications, such as transmissions, due to their low cost and high efficiency. The design allows the entire gear tooth to make contact with the tooth face at the same instant. As a result, this type of gearing is subjected to high shock-loading and uneven motion. Design limitations include excessive noise and a significant amount of backlash during high-speed operation.

Bevel (straight- and spiral-cut) gears transmit motion between shafts that are at an angle to each other. Primarily found in industrial equipment, as well as some automotive applications (differentials), they offer efficient operation and are easy to manufacture. As with spur gears, they are limited due to their noisy operation at high speeds and are not the top choice where load-carrying capacity is required.

Worm gear sets employ a specially machined “worm” that conforms to the arc of the driven gear. This design increases torque throughput, improves accuracy and extends operating life. Primarily used to transmit power through nonintersecting shafts, this style of gear is frequently found in gear-reduction boxes as it offers quiet operation and high ratios. Its downfall is its low efficiency.

Hypoid gear sets are a form of bevel gear, but offer improved efficiency and higher ratios over traditional straight-bevel gears. Commonly found in axle differentials, hypoid gears are used to transmit power from the driveline to the axle shafts.

Planetary gear sets, such as those found in automatic transmissions, provide the different gear ratios needed to propel a vehicle in the desired direction at the correct speed. Gear teeth remain in constant mesh, which allows gear changes to be made without engaging or disengaging the gears, as is required in a manual transmission. Instead, clutches and bands are used to either hold or release different members of the gear set to get the proper direction of rotation and gear ratio.

Helical gears differ from spur gears in that their teeth are not parallel to the shaft axis; they are cut in a helix or angle around the gear axis. During rotation, parts of several teeth may be in mesh at the same time, reducing some of the loading characteristics of the standard spur gear. However, this style of gearing can produce thrust forces parallel to the axis of the gear shaft. To minimize the effects, two helical gears with teeth opposite each other are used, which helps to cancel the thrust out during operation.