I trust only AMSOIL to protect my Skeeter with its Yamaha Outboard Motor. From Power head to lower unit AMSOIL protects it all. I use AMSOIL Marine grease to protect the bearings. Shop now

Preferred Customer receive 25% off on all products and free shipping on orders 100.00 or more.

AMSOIL Mechanical Lab Technician Pat Burgraff boasts 25 years of experience working on marine motors. He’s wrenched on just about every make and model of outboard and inboard motor on the water today. In that time, he’s seen firsthand the suffering points marine motors face and what it takes to ensure enthusiasts get the most years and best performance from their motors.

Here are his tips to keep your marine motor running well.

It should go without saying, but one of the best ways to keep your marine motor running well is to use it.

Gasoline starts to break down in as few as 30 days. Gums, varnish and other debris can form and plug the small fuel passages in the carburetor, preventing the motor from starting or running properly.

“The carburetor can plug up pretty quickly and easily,” said Burgraff, “especially on smaller four-stroke motors.” In his 25 years of experience, Burgraff said bad gasoline is one of the top causes of marine-motor problems. Using your boat and motor frequently helps turn the gasoline over before it deteriorates and helps keep the fuel system clean and running well.

It also conditions seals and gaskets, helping prevent them from drying out and leaking.

Life often gets in the way of fishing or boating. If you can’t hit the water as frequently as you’d like, make sure to stabilize the fuel to prevent it from oxidizing and going bad. In fact, it’s best practice to add stabilizer every time you fill your gas can or tank. 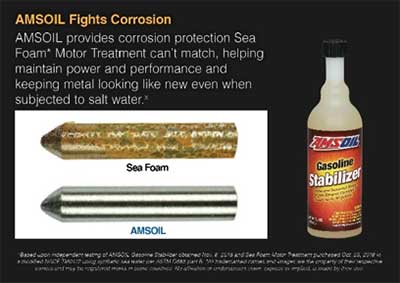 For continuous use and during short-term storage less than six months, AMSOIL Quickshot® provides a great solution. It not only stabilizes fuel, it also cleans fuel-system components and fights problems associated with ethanol.

Water causes all kinds of fuel-system problems. Cover gas cans and tanks to keep water out. “If you leave your gas can uncovered in the rain, water can enter through the vent cap and contaminate the gas,” said Burgraff. If it’s pulled into the combustion chamber, it won’t burn. Water can also bead up and plug the fuel system, causing the motor to run rough – or prevent it from starting altogether.

Ethanol in fuel can absorb water and cause the ethanol/water mixture to separate from the gasoline and fall to the bottom of the fuel tank, known as phase separation. When it’s ingested into the engine, it can cause catastrophic engine damage. 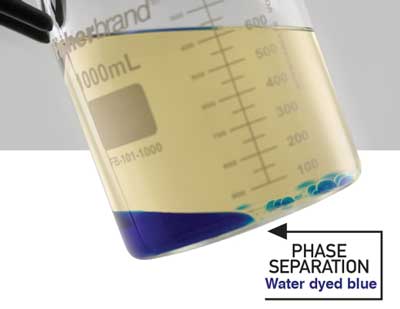 AMSOIL Quickshot helps keep water dispersed in the fuel and moves it through the combustion chamber as a normal part of operation, keeping your engine protected.

4. Grease the tilt tube and steering

Continuing the theme of water causing problems, it also gets into the tilt tube and causes corrosion. This prevents you from smoothly raising or lowering the motor.

“A lot of people forget to grease the tilt tube and steering,” said Burgraff. “Don’t overlook this step, or it’s only a matter of time before corrosion forms.”

AMSOIL Synthetic Water-Resistant Grease is perfect for this application. It clings tenaciously to metal and resists water washout to stay in place, protect metal and help prevent rust.

Water can infiltrate the lower unit and contaminate the gear lube, which reduces its ability to protect against wear. Gear lube contaminated with water also creates foam. When foam bubbles are pulled between meshing gear teeth, they collapse and allow metal-to-metal contact and wear. 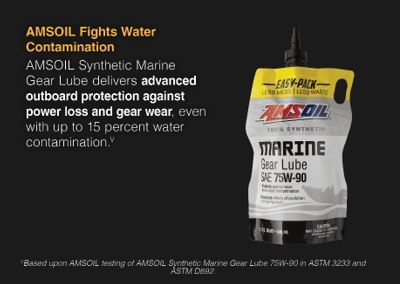 Change gear lube each fall prior to storage to remove any water and prevent it from freezing or causing rust during the winter. The AMSOIL Synthetic Marine Gear Lube easy-pack makes the job easy and eliminates the need to use a messy lubricant pump.

Constant exposure to water can wash the grease from trailer bearings, hastening failure. “A couple times a year, pump a little grease in the bearings to push out any water that may have accumulated,” said Burgraff.

Again, AMSOIL Synthetic Water-Resistant Grease is perfect for this task. It fights rust formation and helps keep your trailer on the road, not alongside it after a bearing fails on the way to the lake.

Gasoline can enter the oil sump in four-stroke motors and contaminate the oil, which is called fuel dilution. If the motor doesn’t reach normal operating temperature, the fuel can fail to atomize properly, meaning the gas won’t burn thoroughly, causing fuel to wash past the piston rings and enter the oil sump. Normally, the oil should reach a sufficient temperature to evaporate accumulated fuel.

“On a cold body of water, however, the engine may not get hot enough to evaporate fuel in the oil,” said Burgraff. “If you notice the oil level has increased and oil color is normal, you may have fuel in the oil.” Fuel dilution reduces the oil’s viscosity, which reduces wear protection. It also causes the oil to break down sooner, requiring frequent changes.

In this case, change the oil and make sure to run the engine enough to reach normal operating temperature on occasion to help prevent it from happening again.

If the oil level has increased, but the oil color appears milky, you likely have water in the oil due to a faulty head gasket. In this case, stop running the motor until you can get it fixed. Shop now