Riding season is just around the corner its a good time to get all the maintenance done. I always start the season with fresh oil and filter.  Like always AMSOIL has you covered oil and filter (your choice of chrome or black) in one convenient package. A little AMSOIL Quickshot in the fuel and I am ready to fire that bad boy up. This is a great testimony below to AMSOIL and total protection. It is one of the many reasons that I have faith in this oil. Shop now

Remember Preferred Customers receive 25% off on all products and free shipping on orders 100.00 or more.

Kevin Fitzgerald, of Southbridge, Mass., knows how to take care of a motorcycle. His 2000 Harley-Davidson 1200 Sportster* is in impeccable shape despite accumulating more than 51,000 miles (82,000 km). The bike not only runs great, it looks great, having won Fitzgerald more than 200 trophies, including “Best Stock Motorcycle” at Laconia Motorcycle Week in 2004.

Over time, Fitzgerald has added chrome and performed various upgrades, including increasing the bore from the stock 1200 cc to 1350 cc for better performance and more power. “I’ve done just about everything you can do to a motorcycle,” he said. He also upgraded to AMSOIL 20W-50 Synthetic V-Twin Motorcycle Oil after buying the bike new. He’s used the oil exclusively ever since.

“I’ve always cosmetically maintained the bike to the maximum degree, and mechanically I’ve always maintained it, which is why I’ve put AMSOIL in it from day one,” said Fitzgerald.

“I could tell it had come from the engine.”

Fitzgerald loves to hit the highways in Massachusetts and nearby Connecticut whenever he can. That’s just what he was doing prior to the July 4th weekend when his bike suffered an unfortunate mishap. He was cruising along I-84 to East Hartford, Conn., when he heard a loud “thump.”

“It was almost as if I’d run over something in the road, but I knew I hadn’t,” he said. “I could tell it had come from the engine.” The bike continued to run, although Fitzgerald knew something was amiss. He was reluctant to pull over since I-84 is such a busy highway. “I never leave my bike abandoned anywhere,” he said. “I once pushed it five miles when I had run out of gas because I wouldn’t leave it on the highway.” 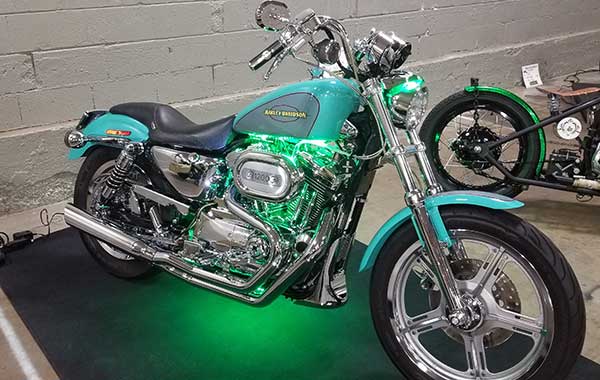 Engine runs with no oil pressure

Fitzgerald could hear the engine growing progressively louder. “It sounded like an engine with no oil – that metal-on-metal sound none of us wants to hear,” he said. Fitzgerald found out later that the oil light failed to illuminate due to a loose wire. Otherwise, he said, he would have stopped if he’d know the engine had no oil pressure.

At this point, Fitzgerald was about 15 miles (24 km) from the Harley-Davidson dealership in East Hartford. He decided to continue to the dealer despite the engine noise worsening. “It was really making a racket,” he said, “But desperate times call for desperate measures.”

After he had arrived and shut off the engine, the techs came out and asked him to start his bike so they could attempt to diagnose the problem. “Right away, that metal-to-metal sound was like an egg beater,” said Fitzgerald. “They said, ‘Turn it off! Turn it off!’” The techs immediately knew the bike had no oil pressure. Fitzgerald told them about the noise he’d heard on the highway about 15 miles (24 km) back.

When the techs were able to look at the bike following the holiday weekend, they discovered the oil-pump gear had sheared off. They found metal shards in the oil-pump assembly and pieces of the gear that drives the pump. Without a functioning oil pump, the upper end of the engine doesn’t receive lubricating oil. Fearing the worst, Fitzgerald authorized the techs to scope the engine and check for damage to the pistons or cylinders.

“They called me back later in the day and said, ‘Believe it or not, it appears your engine is completely fine – no damage,’” said Fitzgerald. “I said, ‘How is that possible? I drove it nearly 15 miles in 90°F (32°C) heat at 70 mph (113 km/h) and didn’t do any damage to the engine?’” Despite his worst fears, Fitzgerald’s engine survived the ordeal with no damage.

Not long after having the oil pump replaced, Fitzgerald put about 150 miles on the bike riding through Connecticut, and the bike ran perfectly. And he gives the credit to AMSOIL Synthetic V-Twin Motorcycle Oil.

“I truly believe that the only thing that saved my engine is the fact that I was running AMSOIL,” he said.